The pandemic may have shut down the world, but not the illegal activities of mangrove and wetland destroyers and land mafia

MUMBAI: The pandemic may have shut down the world, but not the illegal activities of mangrove and wetland destroyers and land mafia, environment lovers said.

Vast stretches of mangroves are being destroyed at least three major locations in Uran by various project proponents in broad daylight, in violation of Bombay High Court judgement and coastal zone regulations and is on in Uran, environmentalists said.

The culprits are taking advantage of the pandemic and the extended lockdowns when there is hardly any surveillance from any authority, the environmentalists said in a complaint to Chief Minister Uddhav Thackeray and Environment Minister Aditya Thackeray.

“What is shocking is that the mangrove killing spree and acres and acres is on with full speed in Holding Pond 2 area of Dronagiri node in Uran which has been placed under CRZ-1 by the Maharashtra Coastal Zone Management Authority (MCZMA),” said B N Kumar, director of NatConnect Foundation. The areas have been levelled and even construction has begun.

He expressed his distress that environment protection has taken a backseat during the pandemic as if all government officials are busy with only Corona related work. He asked the government: “Are the environment and forest department people working at COVID care centres or vaccination stations?”

Holding Pond 2 is a contiguous 237 hectare running waterbody and even in the nomenclature of local planner CIDCO, the area is supposed to be a flood control mechanism. But unfortunately, the holding pond itself is being shrunk with the burial of lush green mangroves, said Nandakumar Pawar, head of Shri Ekvira Aai Prartishtan.

“We have sought immediate intervention at the highest level, halting the construction and restoration of the waterbody so that the mangroves will begin to sprout on their own,” said Kumar.

MCZMA said there can be no construction at this place due to the presence of mangroves.

NMSEZ, which has been asked to stop its illegal landfill on mangroves and wetlands elsewhere in Uran -at Pagote and Bhendkhal earlier, has focused its development work off Coastal Road in Dronagiri, said Dilip Koli of traditional fishing community forum Paaramparik Machhimar Bachao Kruti Samiti. “We can see large numbers of mangroves being mercilessly buried at this NMSEZ site,” Koli said.

The Bombay High Court appointed mangrove protection and conservation committee has earlier asked NMSEZ and CIDCO to restore the destroyed mangroves and the wetland part. CIDCO, despite being a 26% partner in NMSEZ, has thrown its hand up saying the areas have been handed over to the project developer, Kumar recalled. “Now We do not see any point in complaining to the HC appointed mangrove committee as its orders are being openly flouted and challenged by the project proponents,” Kumar said.

Koli also pointed out that large chunks of mangroves and wetlands are being destroyed under the garb of landfill for Uran Railway station.

On NatConnect’s complaint, the Chief Minister’s Office has already asked the environment department to look into the issue. But obviously the lockdown has come as an excuse for the surveillance officials, Kumar said.

One does not have to wait till the next generation to see the impact of this destruction of nature, he said and pointed out that Uran is already facing unseasonal floods due to the blocking of tidal water flow. “Yet, the powers that be do not seem to care,” he said. 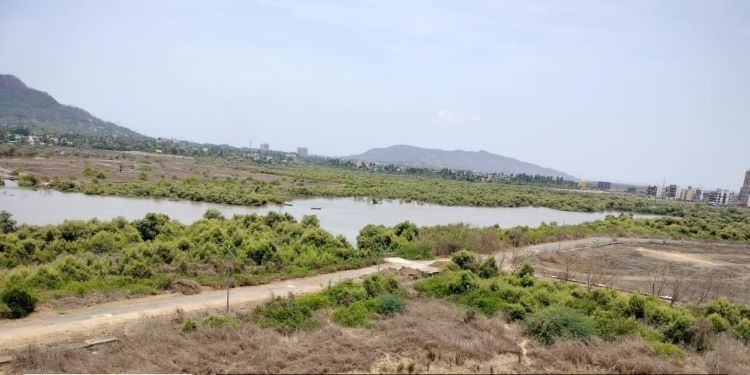 Tagged birds back to Panje after 3 yrs